Ok, so not a real active week for my camera, this week. I did take several pictures at Second Son’s intra-team scrimmage yesterday afternoon, but I’ll spare you all of them (ONLY because you’ll likely be seeing so much of his football team over the coming weeks, I don’t want to wear you out early) except for this one that stood out to me when I was looking through them. See if you have the same thought I did when you look at this picture: 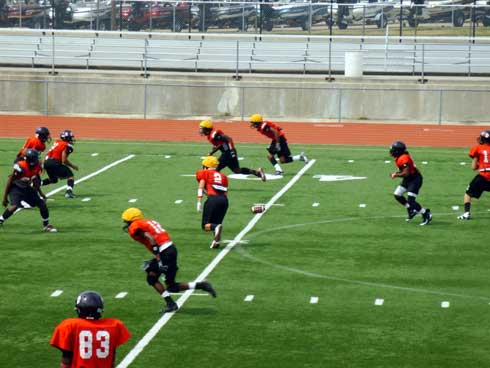 Psssst…guys? Did y’all forget the ball?

It’s just layin’ there in the middle of the field. No one seems to be payin’ any attention to it all. Weird behavior for District Champs the last 7 years running and 2005 State Champs on a mission to take State again this year….

But then, if you look closer, on the right, half in and half out of the shot is #16, one of our QBs in his “I’m about to throw the ball” stance, so maybe I just caught a rare occasion where they forgot to get the ball from the previous snap off the field.