PDD is a nightowl like her mama, except unlike her mama, she doesn’t do well with less than 10 hours of sleep. Not well, at all. Which is why, in the 4th grade, she still has an 8:30pm bedtime. (“But Mom – all my friends get to stay up until 9 at least!” she cries on a regular basis.)

I get her up at 7am on school days which means, if she’s asleep by 9pm the night before, she gets her 10 hours of sleep – and yet she’s STILL hard to wake up and get going without major attitude problems. You can imagine what she’s like the morning after Monday night football games that keep her out past her bedtime. Trust me, it’s UGLY.

So, here we are…Halloween was on a Friday night (thank Heaven above), and she had a friend spend the night, which of course, means she’s up past midnight. But the friend is an early bird by nature, so they’re up and clamoring for breakfast by 8. Ugh. Then, as soon as I get back from taking the friend home, she’s asking if a different friend can spend the night last night. I said she could if she cleaned up her room first (bribery and bartering are the only ways that room gets cleaned), which she did. So last night she’s up past midnight, but fading fast. She must have told me half a dozen times that it didn’t matter she was up so late again because she had an extra hour.

Ha! Guess what time they were up this morning? 6:40! I shit you not! 6:40 on a Sunday morning, these two 9-year-olds are poking me awake asking for breakfast. Of course, their internal clocks think it’s 7:40, but still…

So, they head to the kitchen for Cheerios and I roll over and go back to sleep for another hour. Shortly after I got up, they were asking to go outside and play. I said they could right after they cleaned up their mess from the night before.

I looked out a little later and saw them, along with another little neighbor girl, leading this stray dog around with our leash. It’s a nice looking dog, hopefully just lost and not dumped, but nonetheless, it’s got no hope of finding its way home today because PDD has gotten hold of it. Given that we already have 3 dogs and 1 cat, she knows better to ask her bleeding-heart-sucker-for-stray-dogs mother to keep it, but by God, it’s her dog for the day thanks to that leash.

She came in and swiped one of my mixing bowls to give it water, and took a blanket of hers out there to spread out on the lawn. It’s warm here today – a beautiful Indian-summer day around 80 degrees – so I’m not tripping with her about it. I save my energy for the battle I know is coming when I try to make her come in for the day – WITHOUT the dog.

Just while ago, I realized I hadn’t heard her in awhile, so I got up to look out the front door to see if I saw her anywhere close. This is what I saw: 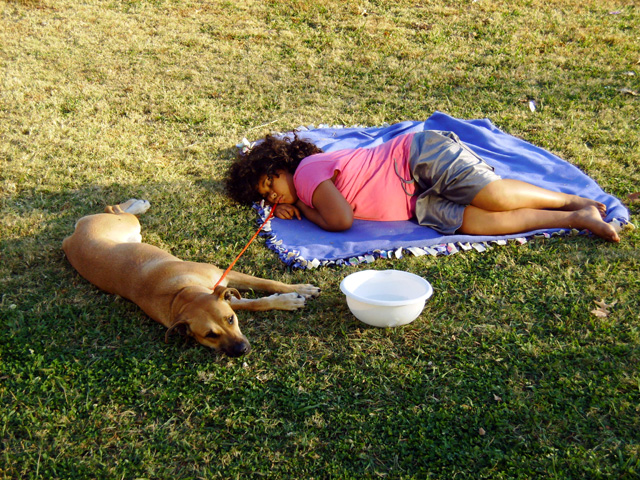 Actually, what I saw was a little different, as the dog was asleep, too, and not looking at me like it is here. But it heard me come out the front door with my camera – PDD didn’t. She’s out like a light.

I gotta give my girl her props…she knew she was tired, but there was NO WAY she would admit it and come in to take a nap. Hell no – not with a dog out there. So, she did the only thing she could do: took her nap on the front yard with the dog.

I don’t know how the dog feels about the forced napping. The look on its face could be apathy just as easily as resignation. I guess we’ll know when I wake her up and make her take the leash off of it.

Cross your fingers, folks, that it bolts like a prisoner set free, because if there’s one thing I don’t need, it’s another dog.