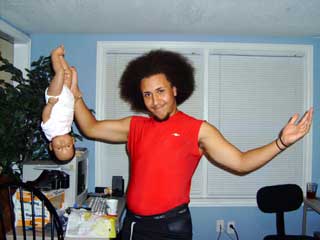 One of Second Son’s classes this semester is Parent and Child Development, and one of the major components of his grade in that class is 48 hours as the daddy of a newborn baby. While this baby looks like an ordinary babydoll – don’t be fooled. The only thing this baby doesn’t do is move on it’s own.

It’s programmed to cry, fuss, suck on a bottle, burp, poop, pee, and sleep (very much on it’s own schedule) and has sensors that detect pressure, gravity, movement, noise, rocking, patting, (and yes, blunt force trauma. LOL) There is a little sensor bracelet that Second Son wears which keeps him from pawning parenting responsibilities off on anyone else (including in the wee hours of the night), and when the little bugger starts it’s antics, he must “chime” the baby with this bracelet by putting the bracelet up against a particular spot on the baby’s back. When he does that, the baby makes a “chime” sound…hence the word “chime” as a verb. 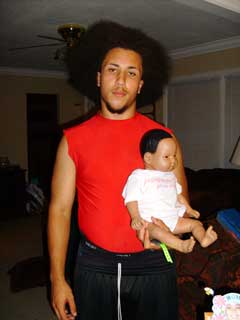 He “brought the baby home from the hospital” yesterday morning before school (which means he picked it up from that teacher before 1st hour) and so started his 48 hours as the baby’s daddy. He returns the baby to the teacher tomorrow morning. As you can see from the picture here – the first 24 hours have been…well…just look at the expression on his face. LOL

He tried to get me to have the baby sleep with me last night, but I said, “Oh no, sweet pea…this is your grade, not mine.” This morning, he did NOT want to get up for school and when I asked how many times the baby woke him up through the night, he said, “I lost count at 6.”

I was asking him what his plan for tonight was if the baby tried to get him up as many times as last night, and that’s when I snapped that first picture.

Ohhhhh…did he pay for doing that!

That baby started fussin’ and cryin’ like nobody’s business, and kept at it for about 45 minutes! Second Son was just about at the end of his rope when it finally quit crying and “went to sleep”. He looked at me with such relief on his face, I almost laughed out loud…almost. I told him he better take his behind to bed along with baby so he has a shot at getting more than three hours of sleep tonight. At first, he looked at me like I was crazy, but then it dawned on him that the trick to getting any sleep with a newborn is to sleep on their schedule when you can. He said, “Mom – was I like this? I mean, was it really this hard?”

I said, “Yes, you were like that. And yes, there were days that were that hard.”