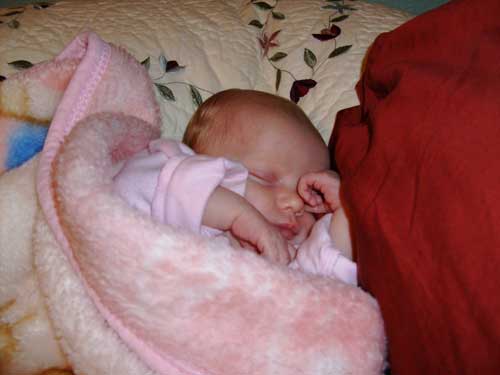 I have a visitor this weekend. She’s quite the high maintenance guest, I might add. And a bed hog, too. But I’m not complaining, not in the least.

Having spent almost 24 hours with her now, let me go on record by saying I’ll be floored, shocked, amazed and any other appropriate adjective you want to pull out of your hat if a DNA test tries to say this is not my granddaughter. Change that pink sleeper and blanket to blue and it’s Oldest Son laying there all snuggled down in my bed. Of course, looks can be deceiving, particularly when they change and evolve on an almost daily basis, as they do when you’re 3 weeks old. But watching her, it’s like someone put me in a time machine and went backward 21 years.

We’re going to take her over the river and through the woods to meet her Great-Grandparents this afternoon. I don’t know how much time we’re going to get with her going forward, or how often she’ll be bunking with Grandma, but at this point, I don’t care. She’s here now and we’re enjoying her.