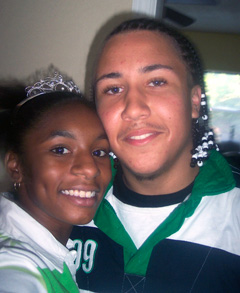 2007 was a banner year for Second Son. Back in January, he made the homepage of the school district’s website for being nominated and selected as a People to People Student Ambassador.

In May, he and his girlfriend (pictured here) went to the 8th grade prom (their first dress up affair) and then graduated to High School…oh yes – they’re grown now…High School.

In June, he went to Ireland, Wales, England, France, Belgium and the Netherlands for 20 days with the Student Ambassador delegation from Northeastern Oklahoma. I aged about a decade in those 20 days, sending him halfway around the world with no family along. Ironically, he came back about a decade more mature, in many ways.

In July, he attended a summer program at the community college which wrapped up with a trip to St. Louis.

In August, he started high school and made starting center for the freshman football team. And now, to wrap up the year, he’s been interviewed on OldSchoolDadTalkRadio.com. Upon listening to the interview, I know that 2008 portends to be an even bigger year for him, if he has his way about it: he’ll meet his father for the first time. Yes, the father that neither of us have seen hide nor hair of since Second Son was 2 months old…that one.

Aside from the 13 billion emotions that coursed through me hearing him voice that wish, I was impressed by this kid of mine. He’s something else, this one.