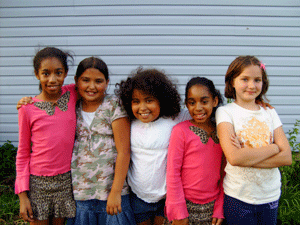 Wrapping up a week-long celebration of turning 9, PDD had her first ever slumber party last night. In attendance were 4 friends from school. That’s PDD in the middle. The two girls dressed alike are sisters, but not twins. The older sister (on the left) is going into 6th grade next year, while the rest of the rest of the girls are going into 4th. 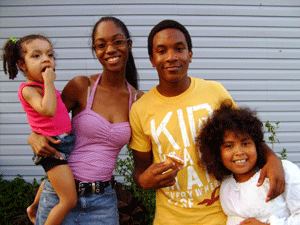 PDD’s niece, Big Sis and Big Brother (who hasn’t been over in months) also came for the evening and had hot dogs, hamburgers and birthday cupcakes with the rest of the crew. Big Brother is turning 17 this summer and is big into football, like Second Son. In fact, when they’re together, the bragging gets a bit out of hand. LOL 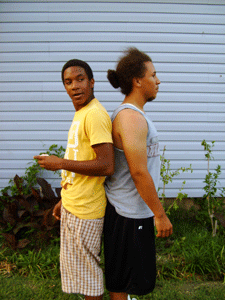 Big Brother was always a scrawny little dude, but he’s shot up and is now taller than me (which isn’t saying all that much, as I’m only 5’4″) but not yet taller than Big Sis or Second Son. Of course, Second Son, who is still dwarfed in height (but not bulk) by Oldest Son, was bragging that he’s STILL taller than Big Brother, even though he’s two years younger. As you can see, Big Brother couldn’t let the smart remarks go unanswered. (I thank my lucky stars Oldest Son was not in on this discussion, or we’d all have needed hip-waders! With these two, the BS only got knee-deep. LOL)

Later on, I got the girls all pajama’d and we blew up two twin-size air mattresses, spread blankets, sleeping bags and pillows everywhere and watched Twitches, Too! (a Disney movie about teenage twin witches.) One by one, they fell asleep, with PDD being the last one out (no surprise.) 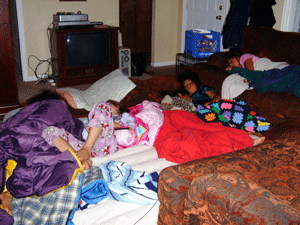 I woke up at 6am and came out to the living room to check on the girls. This is what I found. I went back to bed and their giggling woke me up about 8. We reconstructed the living room, and I made pancakes, bacon and sausage for breakfast. No one wanted to leave at 11 when parents were to arrive for pickup, and they tried to campaign to spend the night again, but I held my ground. Better to have them leave wanting to stay, than the other way around, I always say.

Oldest Son’s girlfriend had an ultra-sound done yesterday morning and there was no ‘turtle’ present in the picture, so apparently, I’ve got a granddaughter on the way. If so, they say her name will be Zoe Lynne (with the ‘e’ on the end of Lynne in honor of my middle name.) They say they haven’t picked out a name for a boy, and aren’t going to, now. Let’s hope the ‘turtle’ wasn’t just hidden from view, then, eh?

Also, as you can see at the top of the sidebar, the NaBloPoMo topic for June is home. According to NaBloPoMo, “Whatever home means to you! A place where you keep all your stuff, the place you came from, a place you dream of creating, or something you hold in your heart.” I’m going to take a stab at it, so be warned: there should be daily posts here for the month of June.