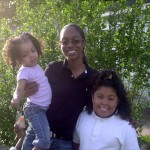 Tuesday evening brought a surprise visit from PDD’s big sister, which completely made PDD’s day. Pictured here is her big sister’s daughter (PDD’s niece) who is 3, PDD’s big sister who is 22 and the famous (or infamous) PDD, herself. (You can click the picture to see a larger view.)

Big Sis caused quite the ruckus by getting pregnant before finishing highschool. Completely Clueless reacted largely by disassociating himself from her, which was easy to do since her mother claims she ‘got that way’ when she was with us on the weekends. Not. But nonetheless, she stopped coming for weekend visitation all of a sudden and then a few months later we heard through the kid grapevine that she was pregnant. That explains that.

The one who really paid the price, who had no part in any of it, was PDD. She adored (adores) her Big Sis, and it used to be mutual. I suppose it still is to some degree, but prior to Tuesday, the last time PDD laid eyes on Big Sis was on her birthday (the day of our fire) in 2006. And Big Sis only lives about 15 miles from here. 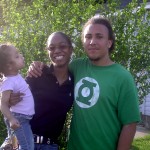 Big Sis was, however, summarily shocked and awed by how grown Second Son looks now. They spent the bulk of their time making up for all the lost time talking smack to each other. I think, deep down, Second Son has felt almost as abandoned by Big Sis as PDD has, though the Earth will stop spinning before he’d ever admit that. There was an edge to his smack talking that told me he’s not completely kidding with some of the barbs he was spewing. Between PDD and her daughter vying for attention the entire time, though, I think Big Sis missed it.

PDD’s 9th birthday is the 26th of this month (yes, on freakin’ Memorial Day…ugh…making a kid party next to impossible with the competition of everyone’s family BBQ plans in the way) but Big Sis said she’d come whenever we decided to have the party.

I’ll believe that when I see it.