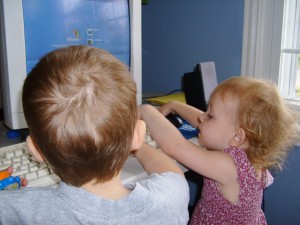 Friday was Oldest Son’s girlfriend’s birthday, so this Grandma had two little ones spending the night. At this point, the best thing about Grandma’s house is all the computers, and beg and beg did they to ‘play game’.

They are both potty-training, and were brought to me with underwear and no pull-ups. So, my first act of Grandma-defiance was to get pull-ups for their little butts. No amount of cute makes up for peeing Grandma’s bed, sorry. 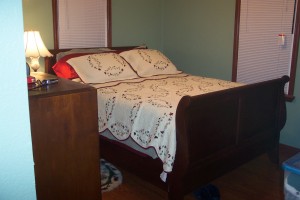 I pushed my bed against the wall and we all piled in like three bugs in a rug. Amazingly, they slept until 10am. But they were, after all, very tired from kicking Grandma all night long. And like most munchkins of 3 and 2 years old, respectively, they have no respect for the difference between the head and foot of the bed. They are, in fact, much happier sleeping sideways. Works for them…not so much for Grandma’s kidneys.

Then the most amazing thing of all happened: Oldest Son and girlfriend showed up by 12:30pm to pick them up! He’s starting to “get it”, that one…’tis much better to surprise Grandma by picking up grandkids earlier than expected. Tends to make her more likely to say ‘yes’ next time you want a kid-less night when you leave her wishing she’d had more playtime this time.