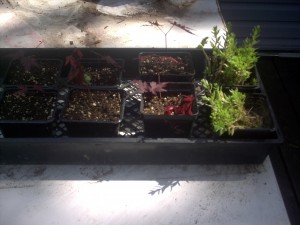 It was Mother’s Day a week early at my house this weekend. Oldest Son (who’s working for a landscaper) came bearing gifts: 4 pots of baby Japanese Maple trees (about 6 different varieties) and 2 pots of Sedum. He was full of instructions on their care and maintenance, which is good, because left to my own devices, I’d probably kill them. Actually, the sedum is probably safe with me, it’s those fragile baby Japanese Maples that probably wouldn’t survive me.

He’s got all kinds of plans for both my front and back yards, which is fine with me, ‘cuz if they’re waitin’ on me, they’re probably backin’ up. He seems to have found something he really enjoys in working for this landscaper, and without a yard of his own in which to tinker, I guess he’s commandeering mine. I told him that was fine as long as he and Second Son don’t get into it over Second Son inadvertently mowing something down with the lawn mower.

However, the best gift of all was: He fixed the brakes on my car!! Oh yeah – it’s a mighty fine thing to have a mechanically inclined grown son. Cost me $20 for parts and I’m no longer scraping and gouging my rotors as I stop at stop signs and red lights. Good thing, too, because I’m subbing every day this week and by week’s end, I’d have probably had to replace the rotors, too.