Ode to Tiffy – May You One Day Get Your Shit Together 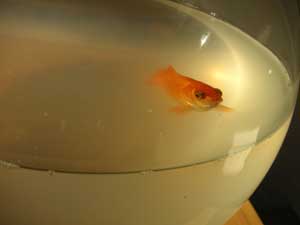 Don’t ask. This is the same child who named our dog, Cheerio.

So, ok, Mr. Tiffy has been swimmin’ around in murky waters lately. His ‘room’ has been about as bad as PDD’s – crap everywhere. In his case…literally.

PDD had been on me all week to clean his bowl, and I kept putting it off. (I had to put a stop to her cleaning his bowl because I’ve had to have my brother-in-law come over twice in the last six months to un-stick my garbage disposal because of aquarium gravel being stuck in it.)

Now, I’m real technical in my fishbowl cleaning process. I scoop him out of the nasty, smelly water with a 1-cup measuring cup. I set him aside. He is swimming in tight circles wondering why and how his world got so small all of a sudden, poor guy.

I set the bowl in the sink and proceed to flush it out with clean water. I swish the gravel around and all manner of nastiness floats to the top, so I flush again…this time with the sink sprayer. Zero gravel escape into the garbage disposal below. Success!

Full of clean, sparkly water, I set the bowl back up on the counter, add the chlorine remover drops and swish the water around with my hand. I notice the water is a bit cool…ok, very brisk…so I add a little hot water to warm it up. Perfect.

So, I pick up the measuring cup (he’s still swimming in circles, by the way, probably quite dizzy by now…) and proceed to strain the funky water from the cup.

I’ll be damned if the little bugger didn’t come flippin’ out of that cup, over my hand and BLOOP!…straight into the garbage disposal!!!

Jaw-dropped, I stood and stared in disbelief. SHIT!

So, I stick my hand down in the disposal and attempt to fish him out of there (pun intended) without impaling him on those teeth down in there. You think the little shit would let me get him?

After about five minutes of this craziness, I looked at the switch.

And then I flipped it. Bye-bye Tiffy. May you one day get your shit back together.

I picked PDD up from school and I had to confess my horrible deed. To her credit, she was fairly gracious about it. It only cost me a Happy Meal at the Wal-Mart McDonald’s, a pack of Jonas brothers pencils, some sidewalk chalk and, of course, a replacement fish. Instead of another Beta, we got 4 goldfish.