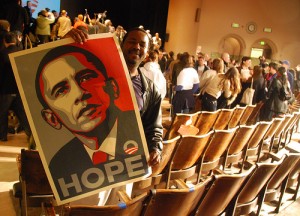 I imagine everyone with a blog is writing about the inauguration of President Obama today. I’m no exception.

I purposefully scheduled no appointments this morning, intending instead to watch the festivities on TV since I can’t be there in person. Though I did end up taking a few calls and helping a couple of clients, at 10:30am, I walked away from the computer and planted my teary-eyed self smack dab in front of the TV, box of tissues in hand.

As emotional as the images and speeches were on TV, for me the most emotional moment was when I looked at Oldest Son and saw unabashed tears in his eyes. I passed him the Puffs box and he unashamedly took a couple and blew his nose and wiped his eyes.

For anyone who knows Oldest Son, you know how big a deal it was for the days events to affect him the way they did. As he listened to President Obama tell us that we all must “pick ourselves up, dust ourselves off, and begin again the work of remaking America,” he teared up again. For all his cynicism, Oldest Son gets what today means, and I think there is a personal message in today’s events for him, as well. Whether he acts on that message remains to be seen.

Second Son asked me as he left to get on the bus this morning if I would record the swearing in and the Inaugural Speech for him. This is the child of mine for whom I see so much hope and promise in the fact that there is now a face in the White House that looks like his. Today, a man became President whose personal story has so much in common with Second Son’s – born to a white mother and a black father who is not a part of his life, shaped by close relationships with his maternal, white, middle-class grandparents…the path of possibility was cleared for Second Son today.

But more than all of this, I am encouraged by President Obama’s message that what lies ahead will not be easy, but we’re in it together. I have no illusions that he will be able to wave a magic wand and solve all our country’s problems in one stroke, but I do believe that he was the ability to elicit different behavior out of us, the American people by recognizing our hopes, our struggles and our dreams and letting us know we are heard. I, for one, have never felt like my President has heard me, knows who I am or understands what’s important to me…until now. Because I feel heard and understood, I am willing to follow his leadership, trust in his judgment and support him.

I remember shaking my head in disbelief at those who would deride Obama for being a “community organizer”, as if that somehow had no relevance to his bid for Presidency. What is this nation but a huge, diverse community in dire need of some organization?!

As I see it today, Obama’s Promise is that he’s come to lead, inspire and organize us all into action that propels us, individually and as a nation, forward. As long as he keeps talking to me, as long as I feel heard – whether I agree with every decision he makes, or not – I will support him.

I’ll leave you with my favorite part of his inaugural speech:

“What is required of us now is a new era of responsibility – a recognition, on the part of every American, that we have duties to ourselves, our nation, and the world, duties that we do not grudgingly accept but rather seize gladly, firm in the knowledge that there is nothing so satisfying to the spirit, so defining of our character, than giving our all to a difficult task.”
-President Barack Obama