The Merry Month of May

We’re going to have some major fun at our house this month. I know you’ll be wishing you could be here to share the joy, so I’ll do my best to post pictures and maybe even a video or two so you can feel included.

The first bit ‘o fun on the schedule was opening our pool. This is a picture of our pool, taken oh…probably at least 4 summers ago, before our house fire. Looks relaxing, doesn’t it? 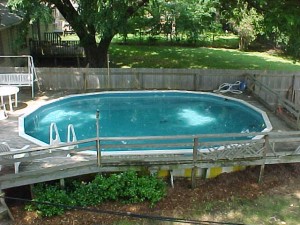 Well, here’s what a house fire, a major ice storm and lack of funds last summer to address the mess has left us with: 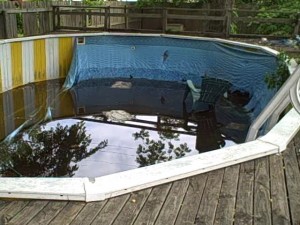 So, being the proactive, organized planner I am (*cough*) and not being the least bit interested in tackling this project myself, I got two quotes to clean up the mess and install a new liner – one from the pool place we’ve dealt with all these years (and who replaced the liner 10 years ago after Oldest Son thought it would be cool to ride his bike in the pool) and one from a pool maintenance service here in town.

Given that the ice storm caused a huge limb to come down out of the pecan tree at the back of the pool which took out the pump AND the filter in one crash landing, I still have to cough up $459 to replace those, and that doesn’t include the chemicals to get it going. So suddenly I’m looking at @$2,300 to get this pool looking like that first picture again. Not funny to me.

So, my good friend Google and I put our heads together, and we found a place online that manufactures oddball sized vinyl liners for above ground pools. I called them up, talked to a very nice man named T.L. for about 40 minutes – net result: I ordered the liner my pool requires, a custom-made-to-order one no less, for $588.96 including shipping from California. It’ll be here by the end of the month. When I asked T.L. if my kids and I could install the sucker ourselves, he said, and I quote, “Oh definitely, Suzanne. We have elderly couples who install the liners they buy from us. I’m sure you guys could handle this.”

(*This potentially could be one of the videos you’ll see here. There is a part of me that is wholly disbelieving it’ll be as easy as he makes it sound.)

Then, not one hour after bringing the pool project cost down by $1,000, before my pleased-with-myself high had worn off, there was an animal control officer at my front door writing me a $75 ticket because Cheerio, our knot-headed dog who thinks the whole neighborhood is her playground had opened the back door and gone “out to play” while I was on the phone ordering the liner.

Aside from her freakish talent for opening doors (from both the inside AND the outside), here are a few of the reasons she can get in trouble like that: 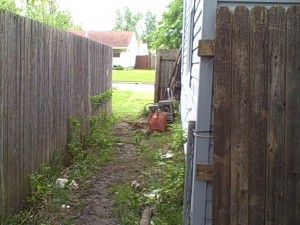 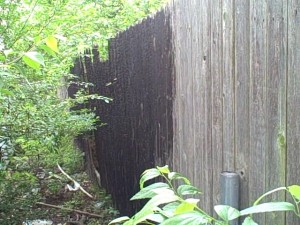 Uh yeah…so before the pool liner arrives, in addition to cleaning out the mess in the pool, we now have fence repair on the list.

But before we can do that, we have to be able to GET to the fence, and that requires de-jungle-fication: 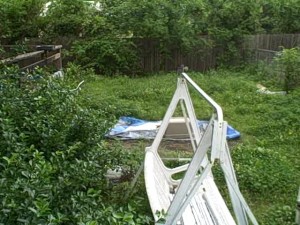 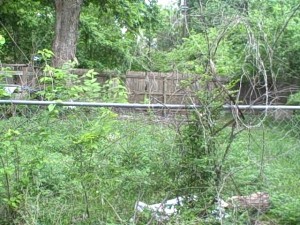 But before we can really be effective with that, we need God to move the rain to another part of the country. I’m sure somewhere else would appreciate a two-week stint of rain like we’ve had.

It occurs to me, though, that because I live in Oklahoma, despite the fact that I live in a metropolitan area, I could go rent me a billy-goat and have the de-jungle-fication part of the project done in really short order. Seriously.