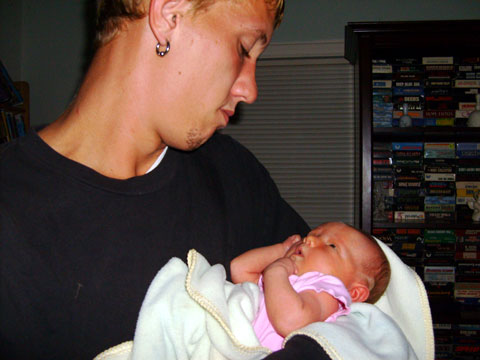 Here is Ex-Girlfriend’s baby daughter, born Thursday or Friday last week, I’m not sure which. I took this picture last night when I took Oldest Son over to Ex-Girlfriend’s mother’s place. He found out Saturday afternoon that the baby had been born and borrowed the car to go over there for a few hours to see her. Then Sunday, he left here with his friend to go fishing and didn’t show back up until Tuesday evening. He’d been over there that whole time since fishing Sunday afternoon.

Am I surprised? No.

Does the baby look like him? Well, sure, as much as babies generally look like anyone but themselves when they’re a week old. But so did Ex-Girlfriend’s first daughter the day she was born and for a long time thereafter, but he’s not her father. Hell, her 4 y/o son looks crazy-much like him, and he didn’t even know her 4 years ago. So what’s it worth to say she does or does not look like him when trying to determine if he’s her daddy? Nada, that’s what.

What I’m trying to figure out is why it matters so much to me? Apart from the obvious, that is.

Seriously, folks – I’ve had a parade of children come into my life calling me both “Mama” and “Grandma” in the last 15 years and I never once really cared if there was no blood tie between us. PDD’s Big Sis had her baby shortly before Completely Clueless and I split, and I’ve been more “Grandma” than he’s been Grandpa, and that’s his daughter, for crying out loud. And you’ve been introduced to Ex-Girlfriend’s older two kids here when they stayed overnight at Grandma’s.

I feel for Oldest Son. All my questions echo his own, but he wants to just accept her as his and go on with life. Great! I’m all for it – except for the crazy Ex-Girlfriend, who appears to be not so much of an Ex at the moment. I mean, am I supposed to just forget Seriously Left of Center – Part 3? Actually, this all might be easier if I could forget because then I wouldn’t worry about my first little grandbaby being cared for by a crazy girl who uses her children as pawns to try to get what she wants. Eventually, she’s going to tell Oldest Son to get the hell out for the gazillionth time, and then where’s he with respect to having a daughter? No paper to show he’s Daddy, so no rights unless the crazy girl grants him some.

We – his dad and stepmom, his brothers and sisters, his grandparents and I – we’re all left out, unable to celebrate the birth of a new member of the family. Why? Because we’re not sure that’s what’s happened, and her knotheaded parents have no plans to find out for sure. Oldest Son invited me and his dad to pay for the DNA test if we want to know so badly – he doesn’t require a test.

Yeah. Ok. And we got who pregnant, his dad and I?

There is a huge part of me that is reeling at all this madness, thinking, “Ok – NOW I understand why others believe in no sex before or outside of marriage. These kinds of ambiguities don’t happen then.” And just that thought crossing my brain is enough scare the shit out of me. Do I really believe that?! Holy crap – NO! A missing marriage license is definitely not the problem, here. What this baby needs is some stability in her little life, and a marriage license for her parents is certainly no guarantee of that.

So, I guess I just have to get over myself and go with my fallback plan of being as positive an influence in her little life as I can with the access I’m allowed by her parents and circumstance. I’ll have to find a way to make that enough for me and my little maybe grandbaby.