Ok, where did we leave off? Oh yeah – Memorial Day weekend….

Well, Sweet Pea was here that weekend, but it did not stop the manual labor efforts in the backyard. While Second Son and I continued work on building gates for the deck, Sweet Pea and PDD went swimming in the kiddie pool: 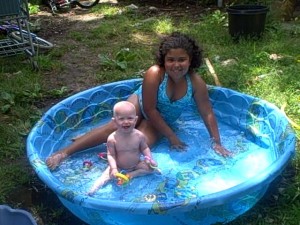 Tuesday after work, Oldest Son had one of his co-workers climb the neighbor’s tree and cut down the branches that were severely overhanging the pool: 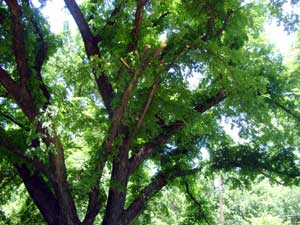 Which created a different kind of mess in the pool: 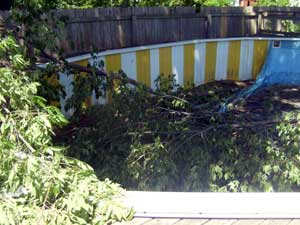 Two Steps Forward, One Step Back

The next day, Oldest Son cut up the branches and he and I took another load of branches and debris to the dump (we borrowed Patsy’s truck that afternoon.)

The new pool liner I had ordered arrived, and we were just about done with repair and cleanup in the yard, so we headed into the last weekend of May hitting the homestretch. Second Son and I worked all day Friday. He shoveled out 5 wheelbarrow-loads of some of the best mulch I’ve ever seen (3 years worth of leaves, sticks, rain water and sunshine’ll do it!) and cut up the old liner into pieces we could get out of the pool and into another borrowed truck’s bed to take to the dump. I cleaned out the walkway (which had been previously plugged up with all kinds of stuff in an effort to block the dogs from getting out) on the driveway side of the house, so we had a nice load for the dump, yet again. 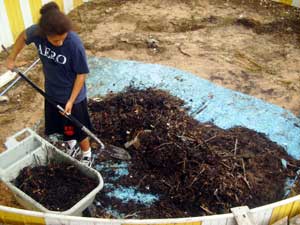 The Best Mulch In Town

After the dump, we went to the pool place to buy the new pump, hoses, vacuum and other equipment we needed. We determined upon inspection that the filter was intact and didn’t need to be replaced; we just needed to replace the sand in it, so while we still had a truck, we made this run.

“Ummm…exactly, son,” I thought to myself.

While we were out, we went by Lowe’s and got a replacement blade for Second Son’s lawn mower, and by the time we got back home, we were whipped. We installed the new pump and replaced the sand in the filter and agreed we’d tackle the installation of the new liner in the morning. We still had to level the sand floor before we could put the new liner in, and neither of us had the oomph left to do that, so we called it a day.

Saturday we spent a couple hours fine-tooth-combing the sand floor for sticks, pecan shells and any other sharp objects that could put holes in the new liner and then started on the leveling. We had to borrow tools from the neighbor to remove the return valve and had to cut away some branches where the shrubs alongside the pool were trying to grow into the coping on the east side of the pool wall, but by mid-afternoon, we were ready to put the new liner in. 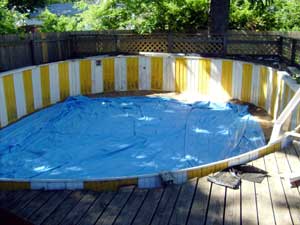 It only took us about half an hour to install the liner, even in the face of having to start over once because we were skewed by about two feet. When Oldest Son came home from work, he found us laying – fully clothed – on the floor of the pool with two water hoses (one from the back of the house, and one from the spigot on the front of the house) snaking back and forth spraying us with water. We didn’t care. We had a pool again!

It took most of the night to fill the pool, so we had to wait until Sunday for our first real swim. 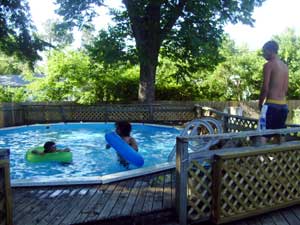 PDD, Second Son and Oldest Son Taking the First Swim of the Season, 2009

I went back to the pool place for the chemicals Sunday afternoon. We don’t use chlorine in our pool because it’s so hard on our skin and it’s such a pain in the butt to maintain. In previous years, we’ve used Baquacil, but it’s fairly expensive, particularly in the beginning of the season. So this year we’re trying a different line of non-chlorine chemicals called Blue Elegance. I spent $75 yesterday (Sunday) afternoon (instead of about $200) and we’re supposedly good for the next two weeks.