I’ve Had Just About Enough

For the first time in my adult life, I’m paying attention to the election process with more than a yada-yada-yada attitude. Here are three things I’ve had just about enough of in this election.

People saying Obama’s experience as a community leader leaves him lacking as a Presidential candidate.

Really, now. That’s a good one! Come on, folks – put your thinking caps back on. Presented with a choice between a career politician (with the so-called requisite “experience”) and a community leader who can effect positive change (and has) – I choose the community leader, thank you very much. Why? Because it’s just a matter of scale. Neighborhood > City > State > Nation > World…all communities.

People saying Obama is a charismatic speaker, and can motivate crowds of thousands, but that somehow leaves him lacking as a Presidential candidate.

If you ask me (and I know you haven’t, but I’m telling you anyway) a leader who can inspire and motivate us to stop whining, get off our asses and participate in our lives and help to solve the problems we collectively face is just about EXACTLY what we need right about now in this country.

For the first time in my adult life, I am interested in the election. All the previous elections…whatever…same old, same old…Democrats dissing Republicans, Republicans dissing Democrats…I never gave too much of a rat’s behind what happened because I didn’t feel like my vote counted for all that much.

And the only thing I can point to this time around is that because I feel heard and understood by a candidate who is echoing my own private thoughts, I feel like my vote matters. I also feel a new responsibility to not just vote, but participate in creating and effecting the change we all want so badly. Yes, we can get this country back on the right track, but no we can’t do it sitting on our large parts whining, bitching, pontificating and pointing fingers of blame. It’s going to take work, sacrifice and probably a good bit of struggle (because, you know…everyone wants change, but no one really likes it) to feel better about how things are going all the way from my own life to the global community.

People suggesting being anti-Iraq-war is somehow being anti-American.

I’m sick of this war and its agenda. I’m sick of feeling like I have to be quiet about that lest I be thought unpatriotic or ungrateful for the sacrifice made by those in uniform who are laying their life on the line everyday so I have the freedom to speak my mind. I am neither unpatriotic nor ungrateful. I think we got suckered into this war by a bonehead in the White House with a personal agenda (but no plan) who capitalized on the swell of patriotism post-9/11 and thought we’d all catch a bad case of the Okie-Doke and go along with it without complaint. I’m sick of the Bush Doctrine, too. The “I’ll hurt you before you can hurt me” attitude that causes so much grief in our personal lives is now our national foreign policy. That’s just ducky. 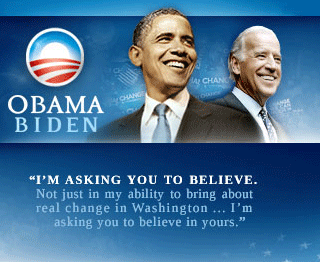 I don’t want to hear about hockey moms, pit bulls and lipstick – I want to hear from the Republicans how, if elected to office, the next four years will be different than the last eight. I want to hear how we’re going to kick our foreign oil addiction and become an environmentally responsible global community citizen. I want to hear about how jobs will be created and how we will transition to new technologies for power and how we’re going to pay to educate our children to compete in a global economy. I want to be inspired to believe and motivated to act. Most of all, I want to be acknowledged as a thinking, voting citizen of this country whose opinions and concerns matter.