Another Ice Storm, But We Keep Power and Internet

It seems difficult to get into a groove so far in 2009. Too many interruptions, it feels like, though when I write it out, I sound like a big whiner. Here we are at the beginning of Week 6, and the kids have only been in school for two full weeks out of the 5 that have passed. Of course, they were out of school on the 19th for Martin Luther King day, but then this past week? OUT THREE DAYS: Tuesday, Wednesday and Thursday! ACK!! 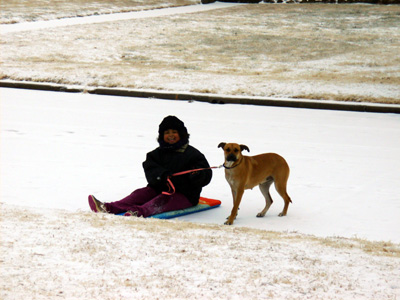 This is PDD and Cheerio playing on the 3″ of ice on our street, which was why the kids were out of school. We had an ice storm that started on Monday around 10am, and the kids came in the door that afternoon already knowing they didn’t have school the next day. This picture was taken Wednesday afternoon after the bulk of the precipitation had fallen. They didn’t stay out long, a) because it was too cold and b) because Cheerio was being extremely uncooperative in her unwanted role as sled dog.

Here she is, later on that day. Apparently, PDD wore her out. LOL 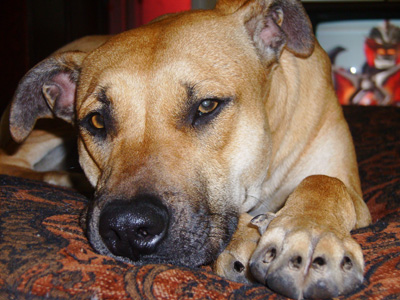