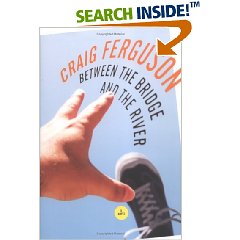 The second book that’s due back to the library tomorrow is Between the Bridge and the River, Craig Ferguson’s first novel. It’s very good. Very. Good.

You might remember Craig as Mr. Wick on The Drew Carey Show, or might, like I do, watch him on The Late, Late Show. What’s ironic is that I never much liked him as Mr. Wick, but during a late-night visit to Blockbuster several years ago, I ran across the movie he wrote and starred in called Saving Grace. I’m a DVD cover reader, and the synopsis of the movie intrigued me, so we brought it home. 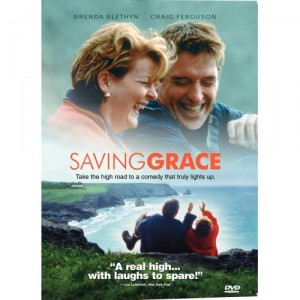 Excellent movie. Really enjoyed it. It gave me a different view of this Scottish man with the accent that (like Sean Connery’s) I could listen to all night long. I remembered this movie when I discovered he was hosting The Late, Late Show, and tuned in one night and fell in heart with him before the monologue was even half way done.

Having watched him every night now for a couple of years, (ok, ok…I record him every night and usually catch up on the weekends which is even better because I can get a couple hours worth of that lovely accent and his off-the-beaten-path sense of humor at a stretch) I can truly say I HEART me some Craig Ferguson in a major way.

So, when I found out he’d written a book, I put it on my list to read. But, as I’ve already explained, my reading for enjoyment time is severely limited these days, so it took me until this summer to get my hands on it, and ’til last night to actually open it up and start reading. I read half of it last night, and as soon as I click ‘publish’ here, I’m going to hole up in my room and finish it.