It’s Good to Have He-Manliness Available

It’s been a busy, busy weekend around here. And Oldest Son has been on a roll lately with the he-manliness he’s been displaying.

Case in point: Friday afternoon, on the infamous trip to Wal-Mart to replace Tiffy, one of the other items I purchased was a put-it-together-yourself wood storage cabinet for PDD’s room. She’s been complaining that she needs shelves (an item not replaced after the fire) in order to REALLY clean her room and put things away, and to a point, she’s right. So, I bought this cabinet thingie which amounts to a 4-shelf bookcase WITH DOORS! Hallelujah! She can stuff her crap in there, and as long as the doors will still close and not burst open spontaneously from the pressure, I’m cool with it. And I’ve promised not to include the cabinet in the post-cleaning inspections. Win-win!

However, in addition to putting the damn thing together, I also had to move her computer desk out of her room to make room for it. (The computer desk was really a stupid purchase, at least for her room. I had big dreams of her doing her homework at it, but alas, she does her homework out here in my office at her computer. And since I won’t let any of the kids have their computers in their room, it was really a waste to have this computer desk in her room because all she did was pile her stuff on it and it became yet another indistinguishable horizontal surface in there.)

So, what to do with the computer desk? Well, that was easy. The kids’ computers are on folding tables out here in my office, and since Oldest Son has rigged Second Son’s computer with a speaker system to die for (or, at the very least, go deaf with), it made perfect sense to replace that folding table with said computer desk. 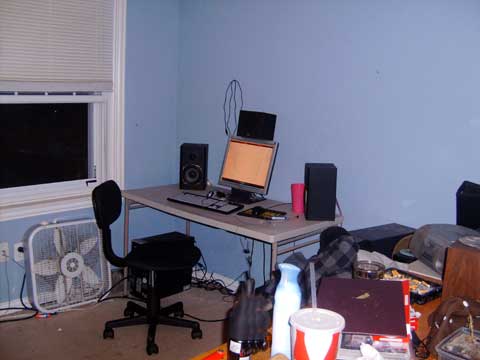 Oldest Son recently went to back to work for the landscaper he’s worked for on and off, so when he got home, I asked him to he-man that big box in from the car (I could write a whole post telling you about the adventure PDD and I had getting the dang thing IN the car in the Wal-Mart parking lot, but I’ll leave that to your vivid and accurate imagination) and sometime over the weekend, would he mind putting it together for me?

When I told him of the full extent of my plan, his eyes lit up and said, “No problem, Mom – I’ll take care of it.” He quickly went to work on it. While he was putting the cabinet together, I told PDD to go unload the desk in her room. Before I knew it, he had the desk pulled out of her room and was he-manning the cabinet back there. 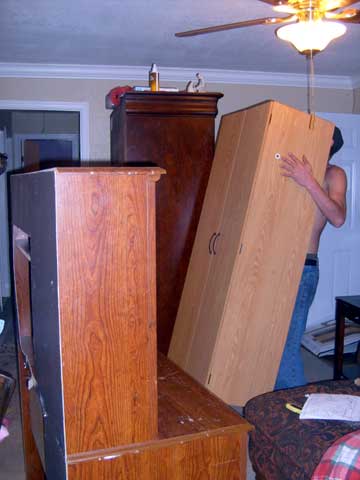 Next thing I know, he’s taken Second Son’s computer apart and has replaced the table with the desk and is excitedly telling me how he’s going to be able to more easily configure the speaker system like a surround-sound system. Shortly thereafter, he’s got the computer back together, and the speakers just like he wants them, including one bracketed at the top of the desk. 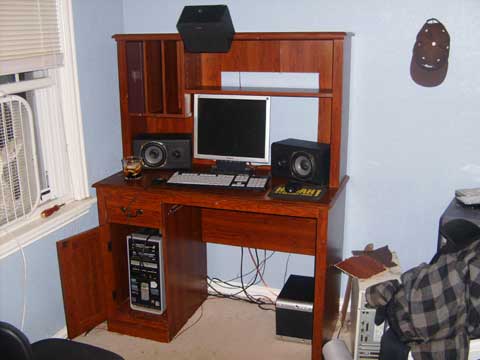 All this in a matter of about 4 hours…