Finding That Balance Between Making Money and Parenting

A recent commenter on Another One Bites the Dust said:

For parents, there are two most important things – money making and children…of course it is easier to say that we need to balance between the two…but how about the reality..?

Lord knows I’ve screwed up countless times in this department as a parent. I may be more of an expert in what not to do than what to do, but I’m learning, and I’m seeing some differences.

One of the things I’ve learned is it’s inordinately difficult to impact your children’s lives if you’re not spending time with them. 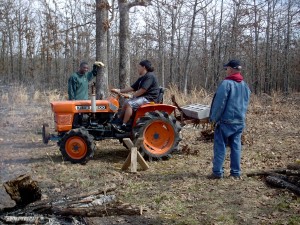 This is a picture of (from left to right) Adopted Son, Second Son and my dad taken a week ago Saturday out at my parents’ place. Adopted Son had been with us a total of two days before we inducted him into the work crew. That day we taught him how to use the chainsaw, how to split and stack wood and build and monitor a bonfire.

Just spending the time together makes a difference. My dad probably doesn’t realize that he made a difference in Adopted Son’s life that day (just like he has in his grandchildren’s lives) just being himself. Adopted Son has made a couple of comments since that day about how cool Grandpa is, how much Grandpa cracks him up. I’m sure if you asked my dad, he’d be hard pressed to come up with anything ‘life changing’ he did or said that day.

And all through the day, Adopted Son got to see me in the role of daughter, something that can only be seen and experienced by putting us in the situation of being with and spending time with my parents. It’s been integral for my own children to see me in the context of extended family, because there’ve been many times I’ve been able to draw correlations between what I’m telling them as their mom and what they’ve seen and heard in situations where I’m the kid.

I also think it gave Adopted Son pause to consider that this pair of ‘old white people’ gave a crap about what happens to him. As awkward as it was for him to be subjected to ‘one of Grandma’s talks’, something which I and my children have been given countless times over the years, you know what? She hit a nerve with him, too, by telling him that while she knew some of his ‘history’, she saw in him the good kid that he really is. Trust me when I tell you my mom doesn’t just say that kind of stuff unless she really sees it.

After dinner, we taught Adopted Son how to play pinnochle. My mom was helping him on the first couple of hands and he picked it up right away. She taught him her strategy and he paid attention. While my kids will tell you Grandma is ‘crusty’ (a family term of endearment which means Grandma tells it like it is and doesn’t too much care about what you think about her candor), to Adopted Son, ‘crusty’ is ‘cool’.

I could spend every waking minute of every day working because I love the things that I do for income, but I also know that it’s all for naught if these kids and I are merely cohabitants in this house. Time and attention are what make kids feel loved, not things. So, I try every day to give them each a little of both. That’s the best ‘I love you’ I know how to give.