Fed Up Friday: Being Used 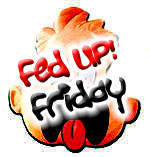 It doesn’t take long for me these days to get a belly full of being taken advantage of, manipulated or used. I spent so many years offering my dignity up on a silver platter in exchange for the unattainable (the love and respect of someone who couldn’t love or respect himself) that if the situation even starts to look lopsided, I call, “Bullshit!”

However, the final frontier for me to conquer in this area is my kids. With most everyone else, my fuse for this kind of behavior is about 1mm long. My kids…well, they still get an inch or two.

Oldest Son burnt up his inch or two this week. He plopped these two dogs of his in my backyard at the end of October without even asking if it was ok with me. Then he moved home the next day with grand plans of starting over, getting a job, and gradually getting a life. Well, none of that has happened, and now for the better part of the last two months, he’s not even been here, but his dogs still are. I am footing the bill for their food, Second Son has been swindled into feeding them and we both get stuck cleaning up after them. Meanwhile, Oldest Son is nowhere to be found. We’re being used, and I’ve had enough.

So I call Oldest Son and inform him that he needs to come retrieve his dogs. He’s full of excuses as to why he can’t do that, so I told him either he comes and gets them or I’m calling the pound. To which he replied, “Fine – call the pound, bitch!” and hung up.

Now before you go getting all outraged on my behalf, you need to know that him saying that did not upset me. It’s just a symptom of a much bigger problem he’s got which I can do nothing about. So I let go and let God – literally. And then, yes, I called the pound.

What does upset me when I allow myself to think about it is the fact that he’s supposedly going to become a daddy this summer. I’ve always believed you can tell a LOT about a person by watching how they treat their pets. Suffice it to say, I’m worried for my impending grandchild. It’s going to be interesting enforcing boundaries with an innocent sharing the consequences.

So, what are you fed up with this week?