I have long said I would never home school my kids because it would end badly…likely with me in jail for murder. Several factors brought me to that conclusion, not least of which was Oldest Son’s public school experience which was – in a word – exhausting. I freely admit to thanking my lucky stars all those years that I had go to work to support my little family, because to take on home schooling that wild child would have been a disaster. He dropped out after a 2nd attempt at 10th grade, but I know as sure as I know my name that it’d have been earlier if we’d tried home schooling.

So, when Second Son showed signs of following his brother’s footsteps, I decided radical action was in order.  By this time, I was working at home and had more flexibility in my schedule, so I got certified to be a substitute teacher and took assignments at Second Son’s school so I could both see what he was up against and reduce his ability to buffalo me. I told him, “I hate to break it to you son, but the high-school dropout position in our family has been taken. Your job is to graduate high school, go to college and live a productive life as a functioning adult. If you don’t like it, take it up with God, because I can’t help you.” Today, he is a college freshman and I am so proud.

Meanwhile, PDD has navigated her way from kindergarden through elementary school with flying colors. Then came middle school last year. Her grades plummeted and the campaign for me to home school her began. 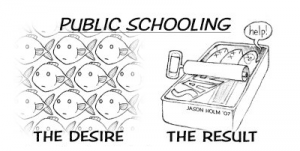 PDD is the only one of my children who enjoys reading.  She is very artistic, distractible and social – none of which are really valued in the public school setting. She is not one of those “fast” girls you see wearing hoochie-mama clothes and boys are still a little bit gross. So last year when she told me that one of her friends had already been pregnant twice, I don’t know who was more freaked out – me or her. Add to this the 30 minute morning battle to get her out of bed, the crying scenes because of the torment she was enduring from the mean girls clique, and her spiraling grades…well…let’s just say she had my attention.

After spring break last year, PDD’s campaign to do school at home began in earnest. She kept saying she hated school and wanted me to home school her. We made it to the end of the school year and she passed 6th grade by the hair of her chinny-chin-chin, and I knew something would have to change for her, but I didn’t know what. I thought maybe the campaign would die out over the summer, but it didn’t.  More interesting was how she spent her summer: self-directed learning online.  She wrote countless reports on dogs, horses, wolves, and giraffes complete with pictures and references.  She and Google became good friends and I couldn’t keep paper or ink in my printers. 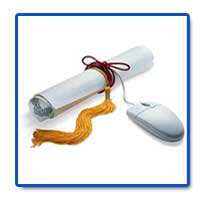 Then, at the beginning of August, when the start of school began to loom large, she said the magic words to me: public school online. My beloved Internet:  The very thing which has so drastically empowered my own life by giving me the means to earn a living at home ~ could it hold the same empowerment for my daughter in the form of public school online?

We are in the process of finding out.

In early August, we applied to the Oklahoma Virtual Academy through K12.com. We both were very enthused about the alternative format and the individualized curriculum. For me, the magical factor was that I wouldn’t be the teacher. So, it’s not home schooling in the traditional sense, it’s school at home.  Big difference.

Long story short, Tulsa Public Schools killed our plan by denying PDD’s out-of-district transfer. Why?  Because they have their own virtual school…surprise, surprise.  No mention of it on the district website, I guess we were supposed to intuit its existence. So, she is enrolled in the Tulsa Virtual Academy for now, and we’ll see how it goes. She is enrolled in 4 classes: math, geography, language arts and science.  She has to do 5 hrs a day for a total of 25 hrs a week.  The good news is the week total is the one they really care about, so she can spread it out over all 7 days if she doesn’t want to do 5 hrs a day, or she could do it all in 2 days if she likes. The bad news is the format is not the most interesting and there is limited interaction with teachers, unless you fail a test twice – then you have to go to their location (which, at the moment, is a suite of offices in Promenade Mall) for tutoring.

This is not ideal – for her or for me – but there is enough of what we both wanted out of online school to muscle through it until January when we can reapply to K12.com and TPS won’t be able to block the transfer. She’s an extrovert and I’m an introvert and we’re both suffering the fact that we’re now together 24/7, but we’re both finding ways to get the kind of time we need without driving the other one crazy.