I’m Not Crazy. This Is What KEEPS Me Sane! 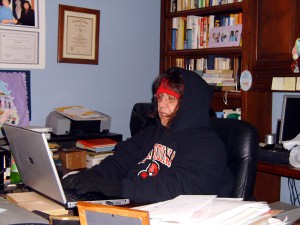 Let me tell you the story of my week, so far.

As I sit here in my office typing (yes, all bundled up with my gloves ON) know, up front, that this is a glass-half-full tale. Let’s rewind to Sunday afternoon, shall we?

It was a record setting warm day – 75 degrees at 3pm on DECEMBER 14th! Yes, it was lovely. Kids outside playing, running around in t-shirts and shorts, blessing our good fortune that we live in lovely Tulsa, Oklahoma as we watch football games on TV where players can see their breath as they play. If we had anything to bitch about it was the crazy high winds that had been trying to blow our fair city to Texas all weekend. But hey – given the choice between seeing your breath because it’s so cold and having perfectly coiffed hair – well, I can always brush my hair.

Fast forward to 6pm. A mere 3 hours later, it is 15 DEGREES and SLEETING like nobody’s business! I shit you not. The kids got all excited, hoping they wouldn’t have school the next day. To their credit, they went to bed at normal school bedtime without too much of a fight, and before I went to bed at 11, the sleet had stopped and I was pretty confident I’d have a peaceful Monday here at home alone.

I woke up before the alarm Monday morning, turned on the morning news and what to my wondering eyes should appear but every damn school district in Northeast Oklahoma closed for the day! What??!! I went to the kitchen to get the coffee started and look out at the backyard, fully expecting to see nothing but a blanket of white or a glare of ice. I remember thinking as I walked out of my bedroom, “Well, at least we still have power.” But when I looked out the window, there was no precipitation of ANY kind! I stood staring out the window, confused, waiting for the coffee to finish. Surely I was missing something, and I was fairly sure that first cup of coffee would help me make sense of it all.

Back on the bed, half-empty coffee cup in hand, I stare incredulously at the screen as the names of every school district in our half of the state rotated across the bottom of the screen. I saw the names of Tulsa businesses, too, yet didn’t ACTUALLY see Tulsa Public Schools go across the screen. When I saw my brother-in-law’s company name, I called my sister, who is usually up at the crack of dawn, but she sounded groggy when she answered the phone like she was still asleep. She told me TPS didn’t have school and asked why was I up? I told her the BIL’s company was closed and asked if that meant he could stay home too, and she said she hadn’t seen that and would have him call in to find out. After I hung up with her, I finally saw TPS at the bottom of the screen, so I went and told the kids they could go back to sleep. She called back a few minutes later to tell me that BIL had to go to work, after all, but thanks for alerting her, anyway.

I got dressed, refilled my coffee and came out here and got to work. About 9:30, I realized I was cold. So, I got up and went to turn the furnace up a little. Normally, I would not do that, but normally, it’s not 14 freakin’ degrees outside! About a half hour later, having heard the furnace kick on and off a couple of times, I realized I was colder, not warmer, so I went to investigate.

The thermostat said my house was 55 degrees! No wonder I was cold! Now, I will be the first one to admit I keep my house cold (just ask the kids – they bitch and moan about being cold all the time), but 55 degrees is a bit cold, even for me. (I keep my house about 65-68. I tell the kids to get over it, because when menopause and hot flashes set in, it will get worse, not better.)

The first phone call went out to the contractor who rebuilt my house two years ago and installed this furnace. He walked me through what he knew about how to determine the problem, and failing resolution, gave me the number of his heating and air guy who actually installed the furnace. I had to leave him a message, so in the meantime, I called my sister back, told her what was going on and asked if I would piss off my BIL if I called him at work. My darling BIL is the head of maintenance for his company, so I knew he would be able to help if the heating and air guy didn’t call me back in a timely manner. She told me to call him, so I did. I told him I just needed him as backup if the other guy couldn’t come out and he said he’d call and check on me after he got off work. He said he could probably fix my furnace in his sleep, he just couldn’t come until after work. I told him I hoped I wouldn’t have to bother him like that, but was grateful he was willing to be bothered.

The heating and air guy called back – from the hospital! He was in the waiting room, waiting to have a CAT scan done. That put the kabosh on my request, so I told him to take good care and nevermind. Before we hung up though, he gave me some good news: my furnace has a 5-year warranty so at least the required parts would be free. He apologized for not being able to come out and I told him not to worry, that I’d have my BIL here after work and we’d be fine.

My BIL came over after work and found the problem: my glow bar was not glowing. Go figure. I didn’t even know I had a glow bar, but apparently, it’s much like a glow plug in a diesel engine (with which I AM familiar) and is the heat source that ignites the gas burners. No glow, no burn, no heat. Makes sense to me. So I need to get a new glow bar.

Can’t get a new one until the parts places open up this morning, so BIL tells me to pack up the kids and come home with him. We can camp in the living room like we did last year during the ice storm. Those two words were all he had to say to ensure I and my children stayed put: ice storm. Just the thought of that crazy week reminded me that all we were really lacking was heat. We still had power, hot water, the ability to cook, phones, satellite TV and most important: we had Internet. So, life might be a little inconvenient and cold, but not unbearable.

The 6-o’clock news crazily announced there’d be no school again Tuesday, so PDD ended up bugging out to the neighbor’s to spend the night in a warm house, so it was just Second Son and I here to brave the cold, cold night. We bundled up in layers, put extra blankets on our beds, and burrowed in, TV remotes in hand, to watch TV until we warmed up and felt sleepy. Since there was no school again (I cannot explain why – we have no ice or snow on the ground, but that’s Oklahoma scaredy-cat school district officials for you) I didn’t set an alarm.

When I woke up this morning in the same position as I fell asleep, I could see my breath in the air. Oh boy. I went to the kitchen to make coffee and saw that it was 48 degrees in the house. Brrrr!!!

Regardless of the fact that I’ve had no heat in the house for two days, and typing with gloves REALLY slows me down, I have much to be grateful for: