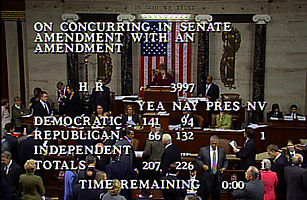 Seven years ago, I had a retirement account valued at over $250K…that’s a quarter of a MILLION smackers, folks. I was sittin’ pretty. It was all in stock options of the company I worked for, and in February or so of 1999, set to give birth in May to my youngest, I cashed out a few of them and got myself completely out of debt except for my mortgage. Let me tell you – there’s NOTHING better than writing a check for $18,990 to pay off your Chevy Blazer knowing that sucker will not only clear, but that there’ll still be money in the account afterward. Talk about tingle all over, baby…

Then, within two years, my retirement account balance went to -$48,658 because the SEC found out that the president and treasurer of the corporation had been doing super-shady-shit to artificially inflate the company’s stock price. They went to jail and December of 2002, I lost my job in the last wave of layoffs that year. Shortly thereafter, the company filed bankruptcy, reorganized, got sold for a song to a competitor and is now doing business under a new name and hopefully better management.

Would it have been nice if some bailout package had been available to preserve my retirement account balance and protect it from dive-bombing the way it did? Hell yeah – but it wouldn’t have been right. Did I participate in any of the shady shit? No. I was one of those “innocent victims” we’re hearing about in the news every morning. And I feel for them, yes I do – BUT, and it’s a BIG BUT – a bailout isn’t the right answer. To preserve something that is crap to begin with is just ridiculous, and along the way you reward the perpetrators of this round of shady shit.

Would I like to have my quarter of a million bucks back? HELL TO THE YES! But you know what? Not if it meant I had to go back to that life I was living then. Going through something like that, having the proverbial rug ripped out from under you like that, sucks butt of the biggest proportion, but it’s not the end of the world. It also serves as a wake up call, teaches you what you’re made of and what’s really important to you, and in its wake, brings opportunity and hopefully some new behavior.

Face it, folks – we’re addicted to credit, addicted to oil, addicted to a lot of shit that we’re gonna have to let go of. Letting go isn’t fun, and most of us aren’t willing to do it. Most of us have to wait until it’s ripped out of our hands and then we call THAT letting go.

Is there a graceful way to transition from where we are to where we want to be? I think so. Do I know what it is? No, but I believe in the idea that a graceful way exists because I believe in things like personal accountability, personal responsibility, jumping in to help even if you didn’t cause the problem, accepting what is and being the change you want to see in the world.

What we’re experiencing now is a real life application of cause and effect. We love it when the effect is something we like…not so much when it kicks our collective asses. Having landed unceremoniously on my large part more than once in my life, I’m here to say each time I got back up on my feet, I had something better than I had before.

Do I think we should bail out Wall Street? No.

Do I think it might mean the end of a lot of things as we know them if we don’t? Yes.

But here’s the good news: a lot of things as we know them right now SUCK. Ending them might not be such a bad thing.